For a long while it was suggested to me that I should try the Oban, but the opportunity never came, though several friends offered, it was never the “right time”.
Yesterday I went to a tasting in a liquor store hosted by a Diageo Ambassador and the Oban was part of the collection offered to sample (Along with Cardhu, Singelton and Talisker). 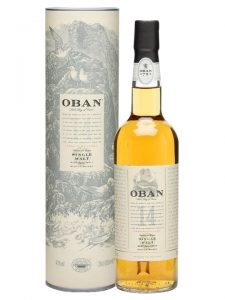 As this was the only one I did not know, I was curios about it and took some notes:

The Distillery
Oban distillery is owned by Diageo. It has only two pot stills, making it one of the smallest in Scotland, producing a whisky that has been described as having a “West Highland” flavour that falls between the dry, smoky style of the Scottish islands and the lighter, sweeter malts of the Highlands.

Nose:The aroma contained traces of Pines, Pineapple Light smoke and sea breeze.
The scents them self come out slowly and are not overpowering, rather having to be coaxed out slowly.

Palate:The flavours that come out of the dram leave traces of Peppers, Vanilla, Apples and Citrus.
Slow release of a light after burn, and goes down smoothly, lingering burn at the mouth not too strong.

Water Adding the water turned the Nose to a strong one that was unpleasant and the coloring stayed the same, the Palate developed an aggressive lingering burn but no change on the After burn.

Conclusion: A nice simple dram that stands on it’s own and does not need water, good as a slow drink, and will be well paired with a fish meal. 3 out of 5

Be the first to leave a comment. Don’t be shy.