A while back a member of the MaltGeeks received a bottle of St. Magdalne for his son’s birth with the caveat that he is not allowed to open it alone.

Just before X-mass we met and opened the bottle to finally sample this long dead distilery. 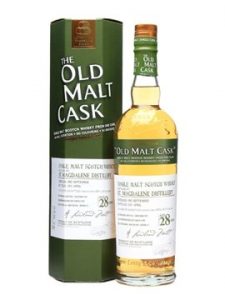 Nose: Strong spirit aroma bursting out of the glass in the initial whiff, once the vapours dissapte a bit the smell of pines, bananas,choclate, almonds and carobs. Very slow release and gentle.

Palate:Very Smooth, almost feels as if it was a triple distilled whisky, nice slow burn coming in the end of the dram. Traces of Dates, coal, Grapes, anc Citrus.

Sadly since we did this as a tasting – we had to add water- though we knew it will not bode well for such a fine dram.

With the water, we saw no change in the colour, although the nose sufferd badly with all of the afor mentioned aromas gone and the nose is just bland. The most profound change is in the palate: the dram becomes corase and stale fast viloent burn in the stomach but not “feel” in it.

Summery: water on this dram is a shame and a ruin for a wonderfull drink, as a stand alone it is fine dram and a pleasure to drink, same there are not many more of this fine distillary.

Be the first to leave a comment. Don’t be shy.